(Excerpt from Before You Live Together: Will Living Together Bring You Closer or Drive You Apart?)

[cont’d]
To be honest, I was surprised, too. Really surprised. Given what she had said all along about marriage,
I had no idea she would even consider living with someone before walking down
the aisle.

You might think, Whew,
are you out of touch, Dave! OK, I am no longer a wide-eyed youth; but I am
a Baby Boomer, I lived through the 1960s, and over the years I have talked with
literally hundreds of couples. I certainly had clues about the trend but was
surprised to discover just how common the to-live-together-or-not quandary had
become.

What the Facts Reveal

Before 1970 it was illegal in every state for a man and a
woman to live together if they were not married. It is no wonder Linda LeClair
and Peter Behr made newspaper headlines in 1968.

Linda was a sophomore at Barnard College. Peter was a Columbia
University undergraduate. These two unwed 20-year-old college students did
something that millions of Americans found newsworthy. They admitted they were living together. Newspapers and magazines
relayed the shocking news. They were shacking up in an off-campus apartment in
violation of Barnard College’s regulations.

New Mexico is one such state. For nearly 150 years, a state
law has prohibited unwed couples from cohabitation. But in April 2000, when a
woman tried to impose that law on her ex-husband—who was living with another
woman—the authorities would not charge him. District Attorney Mike Runnels
said, “It’s not in anybody’s best interest to have the courts clogged with this
kind of a case.” He was saying that times have changed. The law is
old. If they were to start charging people for this crime, the courts would be
packed with couples who live together.

Nearly two decades ago, my wife and I moved into a home in
a typical middle-class Southern California suburb. Because we lived there for
so long, we saw neighbors move in, stay for a while and then move away.
Throughout the time we lived in that neighborhood, one thing never changed.
There was always at least one unmarried couple living in one of the houses
immediately around ours.

What Most Couples Do

Recently I was speaking with a friend who is a
psychiatrist. He is 68 years old.
“Doc,” I said, “how ya doin’?”
His reply was typical. “Great,” he said. “I just finished playing
two hours of tennis.”

I was impressed. I would have been lying on the floor after
playing that long, but he was invigorated and ready to meet the day. Then he
added, “Singles.” He had played two hours of singles tennis at 68 years old! I
would love to be able to do that when I am 68. In fact, I would like to be able
to do that now!

“Where do you get all your energy?” I asked. I was thinking he
had a secret diet or supplement that my wife would just love to start me on!

He said, “It seems to be genetic. Or maybe it just goes back
to my days when I grew up on a farm. Being tired was never an excuse. You just
had to keep going from sunrise to sunset.”

Doc is a fun guy to be around. He jumps at the chance to make
a difference with his life. Even now, after all these years, he still
enthusiastically sees up to eight clients a day. He loves what he does.
Moreover, he always seems to be clued in on what is happening in couples’
lives. Having now practiced psychiatry for more than 40 years, he’s been able
to see firsthand how family life has changed in America.

Doc asked me what my Palm Pilot was telling me I would be
doing that day. I told him I was going to spend some time writing this book.
His reply gave me a firsthand window of insight into his experience with
couples.

“Dave,” he said, “almost all of the couples I see in my
practice today are unmarried couples living together. Things have really
changed. It’s just the way things are now. They live together before they
marry; that is, if they ever do marry.”

Doc’s observation can
be supported by the facts. Today, most couples who marry live together first.

These numbers are not surprising when you poll today’s
teenagers. Although 90 percent of them say they believe in marriage, 74 percent
say they would live with someone before marriage or instead of marriage. They
say, “If things don’t work out, we can chalk it up to experience and move on.
At least we will have learned something about ourselves and marriage.”7

How Children Enter the Mix

I remember singing a nursery rhyme when I was a child. We
usually pulled it out at a time when we wanted to inflict emotional harm on one
of our friends who showed any interest in the opposite gender. Perhaps you sang
it, too. It went like this:

Bob and Bettie sitting in a tree
K-I-S-S-I-N-G.
First comes love,
Then comes marriage,
Then comes baby in a baby carriage.

This rhyme was more than just child’s play. It was descriptive
of the way things used to be. First love, then marriage, then a baby. Most
couples used to marry before they had children. What used to be, no longer is.

Are you ready for another big surprise? For the first time in
sixty years of data collection, the United States Census Bureau found that the
majority of firstborn children are now born out of wedlock.8 Back in
the 1930s the figure was only 18 percent.9

Today there are more than 1.4 million unmarried couples living
together with children under the age of 15.10 This number has been
steadily rising since 1980.

Of these couples living together with children:

Among adults ages 25 to 34 who are living together but are not
married, the percentage of homes in which children are present rose from 34
percent in 1980 to 47 percent in 1990.13

The way things were is no longer the way things are. Today
it’s love first, then child-bearing and then marriage—maybe.

How Religion Affects the Decision

What the Bottom Line Is

When Rachel told me that morning at the gym that she was going
to be moving in with her boyfriend, I asked her why they had made that
decision.

While we halfheartedly continued our workouts, she talked
about her reasons for moving in with her boyfriend. For the next 10 minutes,
Rachel’s enthusiasm gushed out. She could hardly wait to make the move.

Her reasons were the same as those given by many cohabiting
couples, including Ryan and Amy, whom we meet in chapter 2. 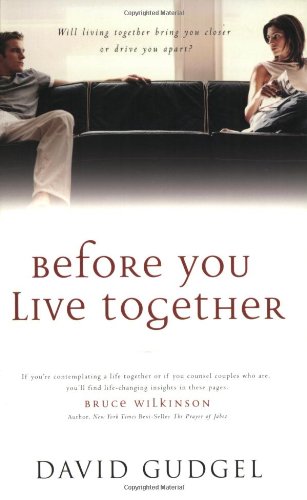 Before You Live Together: Will Living Together Bring Your Closer or Drive You Apart?
By Dr. David Gudgel